It all started a few years ago when Atlanta City Hall East had a liquidation sale of items from their old nine-story building, former Sears, Roebuck & Co. Southern Regional Catalog Distribution Center on Ponce de Leon Avenue. This building is now known as Ponce City Market. To learn more about the history of this building, check out this Creative Loafing article:

I was at the sale, rummaging through a large bin of old items….phone books, magazines, newspapers, etc…when I discovered three historic maps of the City of Atlanta.

The first map is absolutely beautiful and I plan to build a frame for it soon. It has very bizarre measurements at 3.5 feet by 4 feet. The map dates it’s latest revision on January 1st, 1980. It also lists all of the Atlanta City Council (including James Bond!) as well as Mayor Maynard Jackson, Dick Layton as Commissioner to the Department of Budget and Planning, and Panke Bradley the Director of Bureau of Planning. It is a piece of Atlanta history. 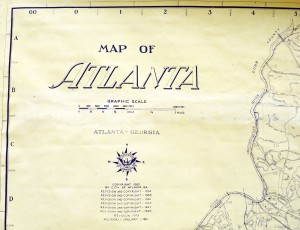 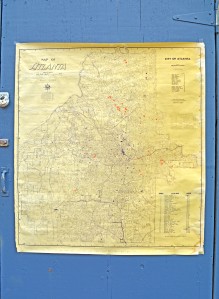 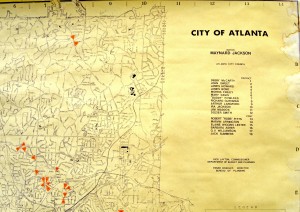 The second map was a Historic Preservation 1979 Comprehensive Development Plan, credited by the City of Atlanta Bureau of Planning, The Department of Budget and Planning, and Mayor Maynard Jackson. 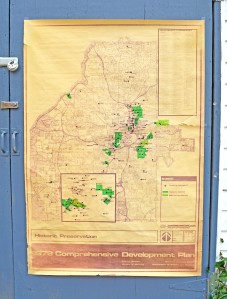 And the third map was a lot like the first, but it was torn in several places and badly damaged by water. SO I decided to cut it up into smaller squares that were all interesting individually.

I took each square and cast them in resin, which I poured into 1 inch and 1/2 inch square ice cube molds. The results were amazing. 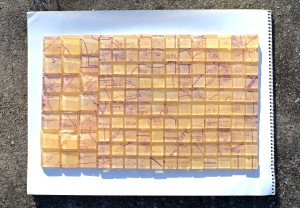 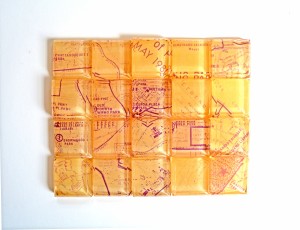 I planed to transform the squares into individual magnets and sell them either online to through a local shop. Other magnets I have given as gifts to friends and family. I cut out squares of areas where my friends and family have lived and worked. I even found my very own house on the map. Dividing up the City of Atlanta to give away to my family and friends felt a little like playing God. Or a property manager. 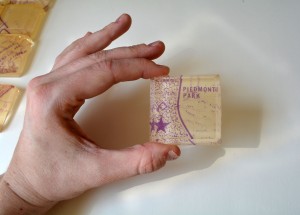 I noticed that I could group certain squares to create patterns: 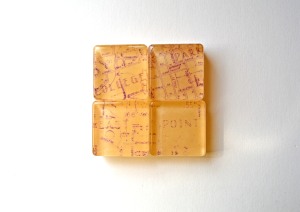 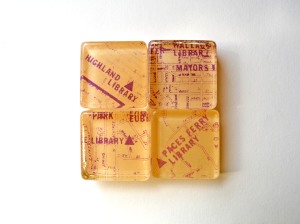 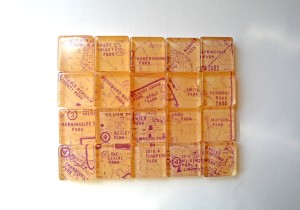 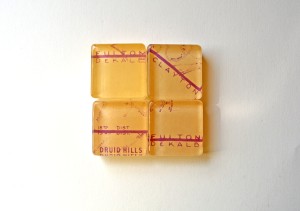 And some pieces are just beautiful by themselves: 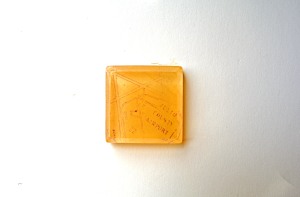 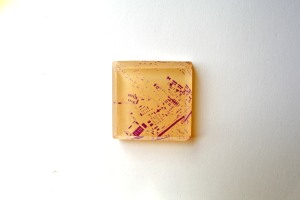 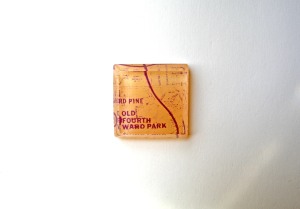 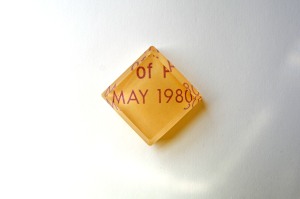 I included my initials and birthday as a personal signature:

It took hours, but I eventually glued magnets to the backs of all of the pieces. 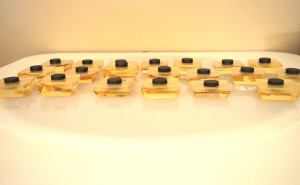 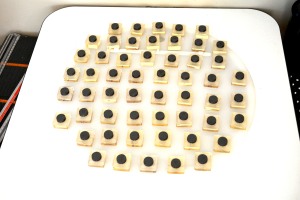 Want your very own piece of Atlanta? These pieces will be sold at my “Nerdy 30” Art Show/Birthday Party at the Doo Gallery on November 11th, 2015 from 6pm – 8pm. See you there!

Overall, the Atlanta Map project became very personal and meaningful. It allowed me to connect with friends and family by sharing pieces of this map with them. It also gave me a chance to look at my city from an aerial view, 35 years in the past. I learned that my very own street used to be called by a different name in 1980. It was so heartwarming to read hand written letters, as opposed to a digital pix-elated print. It was an interesting experience and I learned a lot about my city.